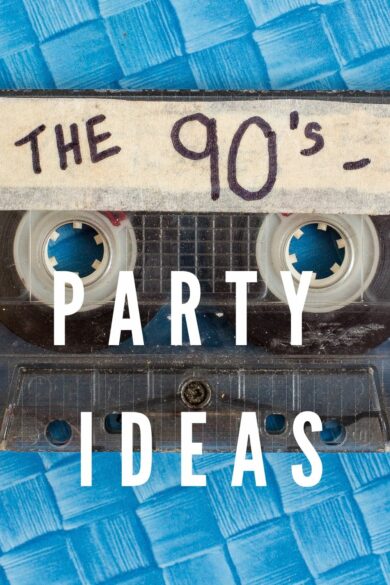 The 90s was an iconic decade for many people. Some of the most famous movies, TV shows, books and music come from this time period. It’s also when many people graduated high school or college which can be a very memorable experience. With all these factors combined it is no wonder that there are so many 90s themed parties happening today!

But with so much to choose from how do you decide on the perfect theme?  No matter your budget or where you’re having your party, here are some ideas to help you get started.

We’re going to give you everything you need to know to plan the perfect 90s themed party we’ll cover:

Food for a 90s themed party

What’s a party without food, anyway?  We’ll cover all of the food options for your 90s party!

Here are some food items that were super popular in the 90s and would be great to have at your 90s party.  It may seem like an eclectic assortment, but these snacks will bring back so many memories for your party goers!

Some of the most popular foods from the 90s were:

Good news, you can order most of them online!  Just click the links!

What candy was popular in the 90s?

We’re all adults now, and there’s nothing wrong with having a party full of candy!  Here are some the most popular candy items from the 90s, many of which are still around today (even if they are more expensive than they were in the 90s)

There’s a lot of snack food and sweet treats on this list, so if you’re looking for something a bit more substantial, read on!

Why nostalgic party food and candy are great, you may want to serve some more traditional food at your 90s party.  You can’t go wrong with pizza or sandwiches.  Who remember’s Book-It from Pizza Hut?  Be sure to have everyone’s favorite drinks on hand too!

Music for a 90s party

The 90s has been called the best decade for music. From grunge to pop to punk, there was a sound and style for everyone. With so many great songs from that era still popular today, it’s no surprise that people are looking to recreate those iconic sounds at their parties.

But what kind of music should you play? It all depends on your personal tastes and the vibe you’re going for with your party.  You can also ask each guest to submit some of their personal 90s favorites and make a mix tape – I mean playlist!

I’ve got some suggestions below!

For a more relaxed affair, try some chill 90s jams. Alanis Morissette’s “Hand in My Pocket”, Spin Doctors’ “Two Princes”, and Counting Crows’ “Mr Jones” are just a few of the laid back tunes you might want to put on.

If your party is scheduled for a night, why not throw on some top 40? There are so many great songs from the 90s that were popular “back in the day” but have faded into obscurity since then. You might want to look into songs by groups like The Cardigans, Chumbawamba, or even Hanson if you feel like going a bit retro.

– Finally, there’s no better feeling than getting together with your friends to celebrate the music of your past while you’re surrounded by all their old posters and other pop culture items. If you want to take that route, try playing some songs that are highly associated with the decade. You’ll definitely need some Nirvana to play for this one

Don’t miss some of these done for you 90s playlists either!

I miss the 90s on Amazon Music

Rediscover the 90s on Amazon Music

All Out 90s on Spotify

What to wear at a 90s party

I don’t think the 90s were too embarrassing a decade when it comes to fashion, in fact I think much of it has come back into style.  The 90s were also about crazy colors and patterns, and, well, big hair, especially crimped hair!

Here are some fun ideas on what to wear to a 90s party:

Games to play at a 90s party

There are so many games that were popular in the 90s!  Board games like Twister, Connect 4, The Game of Life and card games like Uno and Crazy Eights come to mind.  Memory matching games were also hugely popular!

One fun idea is to ask each guest to bring their favorite game from the 90s!

Things like Jurassic Park have been rebooted as Jurassic World, and the Nintendo 64 is now the Wii, but the characters and some of our favorites haven’t changed much.

Get your hands on a boom box for your center piece, and hang posters of all your favorite bands from the 90s around!  Here are some of our favorites:

These are all of the tips you need to have the most amazing 90s party ever!  Don’t forget to take lots of polarid pictures, stream your favorite 90s shows like Friends, crank up that boom box and enjoy your favorite 90s treats.