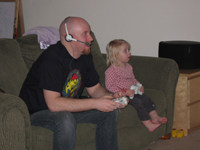 Sarah asked me to help clear the air around the misunderstanding of video games. In my very humble opinion, the basic understanding can be broken down into a few simple areas:

Don’t be scared of them and don’t hate them!  A very common practice is to assume that video games rot your brain and make you dumm……..I mean, dumb. Video games are a form of entertainment just like TV, movies, reading books, running, biking…..etc. All of the above simply need to be done in moderation and they need to be prioritized with your daily routine.

Understand the ESRB ratings and content The ESRB, or Entertainment Software Ratings Board has come out with a helpful way to understand some of the games that people play. The ESRB is a non-profit organization that uses their best judgment for rating content. The best judge, is of course, the parent or legal guardian.

EARLY CHILDHOOD – Titles rated EC (Early Childhood) have content that may be suitable for ages 3 and older. Contains no material that parents would find inappropriate. There aren’t many video game titles that fall under this category, unless made for the computer.

EVERYONE – Titles rated E (Everyone) have content that may be suitable for ages 6 and older. Titles in this category may contain minimal cartoon, fantasy or mild violence and/or infrequent use of mild language. There are plenty of video game titles out there that are E rated. Great for family games, and younger players.

TEEN – Titles rated T (Teen) have content that may be suitable for ages 13 and older. Titles in this category may contain violence, suggestive themes, crude humor, minimal blood, simulated gambling, and/or infrequent use of strong language. Here is where the parent would really need to get involved. As stated above, the ratings are based on a democracy of different people with different standards opinions. Much like the movie ratings, it could be PG13, but have a handful of F-words and brief nudity.

MATURE – Titles rated M (Mature) have content that may be suitable for persons ages 17 and older. Titles in this category may contain intense violence, blood and gore, sexual content and/or strong language. Many titles out there for the Xbox 360 and Playstaion 3. The Nintendo Wii has about 5 or so.

ADULTS ONLY – Titles rated AO (Adults Only) have content that should only be played by persons 18 years and older. Titles in this category may include prolonged scenes of intense violence and/or graphic sexual content and nudity. This is a really rare rating. There have been only 10 or so games under this rating, which means bad news for any title. Nobody buys them.

Get involved. This is where it gets fun. Parents need to understand that video games are fun and that people play them for enjoyment. I find it very interesting that video games have such a focus from the media in regards to games being the cause of bad things. Kids doing bad things because of video games. Now, you have to be 17 or older to buy a M rated video game. But, the same young child could buy a rated R or NC17 movies anywhere without a fuss. They could also buy some really explicit music in rock or rap without being asked to show ID. I think that it should be the same across all areas of media. Regardless of what content is in video games, that is not the problem. The problem lies in parents who buy the games for their kids and let them play all day and night without any supervision or interest in what they are playing. I mean, if you think it’s ok for your 12 year old to play Grand Theft Auto, then what does that say about you? It means that you have no interest in your child and when they do something bad, you blame the video game company for making the game. Parents: If you go around and blame a game for your kids bad behavior, you create such a huge buzz around the game that it sells twice as much. People want to know why this game is “so evil” and everyone goes out and buys it. Don’t ban the game, just don’t buy it. How are these under 17 year old kids getting their games? Parents. Simply do research about the game. Simple good parenting skills will prevent this child from having been exposed to a game that was totally created for adults. The kids out there that do horrible things, such as go to schools and shoot people, is not the games. It’s not the music. It’s the parents who let them sit in their room all day and night and play M rated games. Basically letting the tv be the babysitter throughout the child’s life. It’s clear that these kids have some serious problems, such as being neglected by their parents. Anyway, the point is: Be a parent! It means a lot to your child when you get involved in what they like. You don’t have to like it, you have to tolerate it. If they want to buy a game that is M rated, then find out why they want it. If you want to buy it for them, then that’s cool. I think that means that you have a great understanding of what your child think about life and reality.  My mom would sit down with me and listen to CD’s that I bought to make sure they were OK for me to listen to.  When she would say “no way” I respected her decision (although I didn’t always like it at the time).  It meant she cared enough about me to sit down with me and understand the things that I liked.

Ok, that’s it. Sorry. I just think that we all need to be more aware of what’s out there and that we need to be accountable for our choices that we make for our kids. Thanks.

Sarah Kimmel originally created Organized Mom as a way to promote her software program to help busy moms get organized. The software never went anywhere, but the blog took off! While she still writes occasionally for Organized Mom, you can find her writing at Family Tech more frequently.